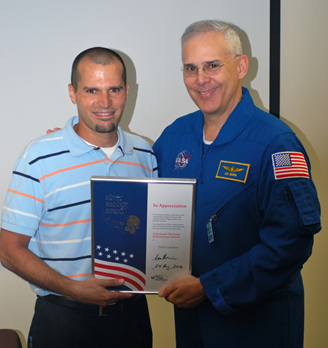 Valcor Engineering is proud to announce that Vitor Cardoso, Senior Project Engineer, has been awarded NASA’s Silver Snoopy Award. Vitor is being recognized for his superb effort in helping to develop the Tank Pressurization Assembly (TAP) that will be used to control the gaseous oxygen used by the RS-25 Main Engines in the Space Launch System.

The Silver Snoopy Award is given to candidates who have significantly contributed to the human space flight program to ensure flight safety and mission success. Less than 1 percent of the aerospace program workforce receive it annually, making it a special honor to receive this award.

“We are so very proud of Vitor and him being the recipient of this prestigious award,” stated Tom Iervolino, Vice President, Business & Product Development. “He truly is a shining star on the Valcor Team who has not only contributed on this important Program, but on many others. He is a class act and is quick to share the spotlight with his team members, which was one of the first things he said at the award ceremony. Thanks Vitor!”

Vitor’s award was presented on August 24th, by NASA Astronaut Lee Morin. Lee Morin has logged more than 259 hours in space, including over 14 Extravehicular Activity (EVA) hours on the STS-110 Atlantis (April 8-April 19, 2002). It was the 13th shuttle mission to visit the International Space Station. Mission milestones included the delivery and installation of the SO (S-Zero) Truss, the first time the station’s robotic arm was used to maneuver spacewalkers around the station, and the first time that all of a shuttle’s crew’s spacewalks were based from the station’s Quest Airlock. He is currently assigned to the Exploration Branch, where he is working on the cockpit of NASA’s newest spacecraft, the Orion Multipurpose Crew Vehicle. He is the supervisor of the Crew Interface Rapid Prototyping Lab.

Valcor Engineering Corporation (www.valcor.com), founded in 1951, designs and manufactures solenoid valves and control components for liquids and gases in critical applications in the aerospace, nuclear, light industrial and scientific industries. Headquartered in Springfield, New Jersey, Valcor’s world-class staff of engineers, designers, and technical support personnel utilize fully-equipped, modern test facilities to test the most precise and exacting standards.
With a library of more than 18,000 designs, Valcor’s design team can modify existing technology to suit practically every hard to handle application. Valcor specializes in custom applications and can create an entirely new product to meet your needs.