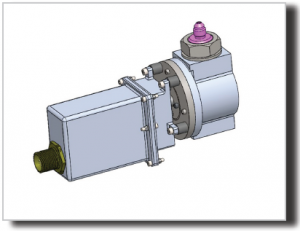 MCVs are often used to replace a traditional pulse-width-modulated solenoid valve for flow control. It can be used in fully open or closed position, but its real value in a fluid control system is that it can be modulated anywhere in between. With a closed-loop feedback control scheme, this allows for very accurate and precise proportional flow control. Unlike typical actuated valves, the MCV is light and compact, with no external moving parts. Further, the system designer can predetermine how the system reacts to power loss. Valcor can design the MCV to fail closed or open, fail in last position, or fail to a specified flow between open and closed. Valcor’s proprietary mechanical design enables the valve to achieve the desired failure position without power; no backup power source is required. The compact design minimizes the need for precious space available on air, rotor or space craft. Vibration in the vehicle is not a factor in the performance of the MCV. Available with either rotary or linear actuation to drive any Valcor or third-party valve.

“Valcor’s Modulating Control Valve design allows one actuator, with slight modification, to satisfy all valve failsafe requirements. Upon power loss, the valve is mechanically actuated to a Normally Open or Normally Closed position, a predetermined flow rate position, or the last commanded position,” stated Steve DiGerolamo, Business Unit Manager, Motion Control.  “The versatility of this unique design benefits the customer with a commonly actuated valve assembly that, due to the use of mostly common components, can lower recurring and non-recurring costs, as well as shorten lead times.”

For more information on our modulating control valves, please visit:

or reach out to us at MotionControl@valcor.com