Putting the Brakes on Mobile and Autonomous Robots

Automation is traceable back to the Ford Motor Company in the early 20th century. Henry Ford is credited for using the first assembly line to build Model T cars in 1913. The assembly line evolved into simple automation with the use of pneumatics and hydraulics to help assemble the cars and related parts. Over the years, more and more processes were automated to increase productivity. Around the same time, the word ‘robot’ was coined in 1921 to describe a machine designed to perform unpleasant manual labor. Media of the day characterized robots as attacking aliens from other worlds, which raised concern among the public, fearing robots would eventually take over the planet; a fear that exists to this day. Industrial robots were introduced to manufacturing in the 1930s. Simple pneumatic or hydraulic devices, they further automated the process of building vehicles, appliances, and other products. Programming them was complicated and difficult, limiting their use. The introduction of computers to control robots in the 1950s vastly expanded their use, as programming was much easier, and the robots were capable of more complex functions. Japan embraced robotics and led the way in developing and implementing the use of more sophisticated devices and controls, especially in the automotive industry. With the introduction of Artificial Intelligence (AI), robots were capable of learning and working with minimal to no human interaction. Industrial robots are either stationary, mobile or autonomous. Mobile robots include drones, Remote Operated Vehicles (ROV) either land-based or underwater, and material handling systems. Stationary and mobile wheeled robots require human control. Autonomous wheeled robots use AI to navigate and perform their tasks.

Today’s highly specialized and capable mobile and autonomous mobile wheeled or tracked robots are the result of decades of evolution in the engineering world. Using a visual system composed of multiple cameras and sensor arrays to guide them, they can move effortlessly across smooth or rough terrain, avoid obstacles while moving boxes around a distribution center, picking, packing and loading cartons onto a truck or diffusing explosives at a crime scene. Biped or Quadruped robots can walk, run or provide entertainment by dancing and performing back flips. Battery powered and employing as many or more than 50 servo motors and actuators to generate movement, these robots are unencumbered by the need for external power supplies. 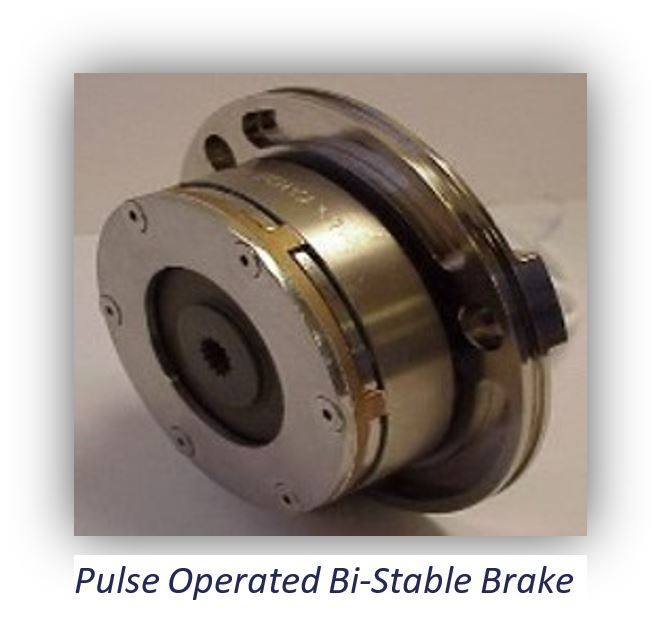 A key goal of the robot designer is to prolong the operating life of the battery as much as possible. All of those motors, cameras, actuators and controls are continuously consuming battery power. Lithium-Ion batteries with more storage capacity per pound are continually brought to market. Electronics and motors that use less power are part of the answer as well. Another solution is the use of Valcor Engineering’s proprietary, patented Bi-Stable Brake. Brakes are used to stop the rotary motion of motors and linear motion of axial actuators. Most brakes are designed to use power to hold or release. Valcor’s Bi-Stable Brake only uses power to shift to a hold position (brake on) or release position (brake off), but not to maintain the position. Therefore, the brake is not consuming power in either position. A 100 mS pulse switches the brake on or off. This enables substantial power savings over conventional spring-operated brakes that require power to hold the brake on or off. In some cases, designers have realized a 10-12% increase in battery life after retrofitting the Bi-Stable Brake into their existing devices.

The field coils do not generate heat, which is important when the Bi-Stable Brake is located in an enclosed unventilated cabinet or in close proximity to temperature-sensitive electronics. Using some additional electronics allows the designer to establish a fail-safe position for the brake as well. For example, if the power should fail, the brake can be set on or off, regardless of the position it is in at the time of the event. Another available feature is position feedback to the control system. This closed-loop position feedback confirms the brake is on or off.

Compact, lightweight, and employing a stationary field coil that doesn’t use slip rings or brushes, the Bi-Stable Brake affords exceptionally long life without the need for service.

Valcor offers custom designed solutions for any Bi-Stable Brake application. Can we design a Bi-Stable Brake solution for you?  At Valcor, We’re Engineering The Future, Today!