Often overlooked in the complex fluid control and delivery systems of these vehicles are the use of manually operated valves. Manually operated valves are used when solenoid valves are not required or desirable. Manual valves are used to operate or lock out on-board systems. They play a critical role in the preparation and testing of the vehicle prior to, and post-flight service and maintenance. They are employed to isolate sections of the fluid control system for pressure and leak testing in ground support equipment, too. 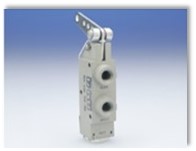 In aircraft and rotorcraft, manually operated valves are used in many emergency-related applications including fire wall shut-off, parking brake, emergency brake, and emergency landing gear blowdown. Firewall shut-off valves allow the flight crew to shut off the fuel to the engines from the cockpit of small general aviation aircraft and business jets. Lever-actuated emergency landing gear blowdown valves allow the flight crew to lower the landing gear pneumatically in the event of a hydraulic pump failure.  Similarly, lever-actuated emergency brake and parking brake valves apply pneumatic pressure to the aircraft main brakes and parking brake in the absence of hydraulic pressure. Rotary valves also enable the flight crew to manually pressurize multiple APUs by diverting manually pumped air or nitrogen gas to one of several on-board APUs. In rotorcraft, a manual valve might be used to inflate the Emergency Floatation Systems (EFS) which keep the craft afloat in the event of an unplanned water landing.

Manual multi-turn valves are also used as proportional devices to preset the control of flow in a system. These valves are suitable for pneumatic and hydraulic applications. A wide range of operating pressures and flow rates are available. 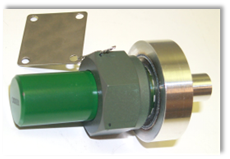 Spacecraft and satellite applications include the pressurization of diaphragm-equipped propellant and oxidizer tanks for Reaction Control Systems (RCS) and Altitude Control Systems (ACS) with pressurant. These tanks are designed with a flexible diaphragm to separate the pressurant from the liquid propellants and oxidizers. Manual valves allow ground crews to pressurize the pressurant end of the tank with helium or nitrogen, typically at pressures as high as 8700 PSIG. The pressurant is then regulated and introduced into the pressurant end of the propellant and oxidizer tanks. Manual fill and drain valves control the pressurization and venting of the pressurant, propellant and oxidizer tanks during pre-flight testing and final pressurization for flight. These valves are capable of multiple operations and require extremely low internal and external leak rates of 1 x 10-6 sccs GHe at 4000 PSIG. This is particularly critical as the valves, once closed for flight, must maintain this leak integrity as the time duration between pre-flight filling and actual flight can be lengthy. In the past, endurance was not a significant issue. Most valves would not see more than 10-20 in-service cycles, as the craft were essentially single use devices. With today’s push for reusable spacecraft, life cycle becomes more important. Life expectancy of more than 50 cycles is not uncommon.

Valcor Engineering, with a long and rich history of creating a broad catalog of custom manual valve designs for aircraft, spacecraft and ground support equipment can tailor a valve design for any application. Valve actuators include handles, levers, and push buttons. Valve designs include two-way, three-way and four-way porting. Valcor offers a total system integration capability, including the manifolding of valves and other pressure, flow control and measurement components into fully tested turnkey systems, ready to install in your air or spacecraft and ground support equipment.

At Valcor, We Do The Hard Stuff!