The Electrification of Aircraft Control Systems

Wilbur and Orville Wright were consumed with their quest to fly. Their commitment and dedication paid off in the first flight of the Wright Flyer at Kitty Hawk in December of 1903. While concentrating all of their engineering skills on flying, they gave very little thought about how to stop their airplane upon landing. Early aircraft had no means of braking other than coasting to a stop in an open field or meadow. There were no paved roads to land on, and the roads that existed were rutted and unsafe for landing. Mechanical aircraft braking systems were developed during World War I as airplanes became more sophisticated, and paved runways eliminated the friction used to coast to a stop. A brake lever in the cockpit was connected by means of a cable system to brakes on the main wheels. Later systems included brakes on the nose wheel. Mechanical brakes gave way to hydraulic brakes, which are still the principal means of braking commercial and general aviation craft. Flaps, rudder and elevators were also controlled by cables from the cockpit. Today’s commercial aircraft are complex combination of hydraulics and electronics that allow the flight crew to taxi, fly, and park the aircraft with relative ease. 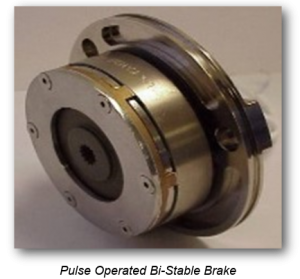 Conventional cable and hydraulic systems have long played a huge part of controlling the aircraft’s primary functions including flaps, rudder, elevators and landing gear. Hydraulics for the braking system may come from the main hydraulics system or have an independent system of their own. Hydraulic braking systems in particular are complex, full of metering, shuttle and anti-skid valves. A typical commercial aircraft hydraulic braking system includes an anti-lock feature based on a complex system of electric wheel speed detectors connected to motor-driven pilot-operated anti-skid valves which in turn controls the hydraulic pressure on the brake unit. One part of the aircraft braking system that is quickly moving to electric brake control is the aircraft parking brake. A simple electric brake, activated by the aircraft’s avionics via foot pedals or brake lever, replaces the traditional hydraulic brake that functions by trapping pressure between a foot-activated pedal and the hydraulic brake actuator. The move to all-electrical braking systems has the added benefit of incorporation into the aircraft avionics system. Braking functions are controlled quickly and accurately based on feedback from wheel speed sensors to the avionics control system processor, enabling excellent braking control on all types of surfaces not achievable with a hydraulic braking system. Interestingly, many delivery vans are now equipped with electric parking brakes that are automatically applied when the van is put into park.

As flight control systems become more complex, and the desire to make them safer and more efficient continues, the use of fly-by-wire technology is growing. Aircraft designers turn to electronics for aircraft control systems, lessening the need for hydraulics. Moving to electronics-based flight control systems also helps to decrease the weight of the aircraft and improve fuel economy. Shrinking or eliminating the need for hydraulic pumps and related valving is a byproduct of moving to electronics. Systems such as the secondary flight controls, flaps, rudder, elevators, horizontal stabilizers and utility actuation can all be safely and accurately controlled by the use of electric motors, brakes and clutches. Performance of these systems is enhanced with the ability to establish fail safe positions for them. In a loss of power, these systems can default to a predetermined orientation, rather than simply stop functioning. Safety and security are greatly improved as well by eliminating the potential loss of control from hydraulic line or seal failure over time.

The next generation of regional and specialty air and rotorcraft will be all-electric. The typical propulsion system consists of battery powered electric motors. There are some hybrid designs that will also utilize solar panels or hydrogen fuel cells to supplement the batteries and increase flight range. In all cases, power must be conserved to protect the range of the craft. Valcor offers bi-stable brakes that enable the controls to act on a command from the avionics, and lock in that position without further use of power.

Several electric Vertical Takeoff and Landing (eVTOL) or Electric Vertical Aircraft (EVA) manufacturers have secured contracts to build and deliver rotorcraft for local package, food, or medicine delivery and short to medium range passenger transport. The first commercial rotorcraft, also known as ORBS (The Air Force Materiel Command refers to these vehicles as “ORBs,” or organic resupply buses.), is due for delivery to customers in 2024. ORBS will revolutionize the ability to travel, commute or deliver goods. For the armed forces, ORBS can deploy munitions on the battlefield. Able to take off and land in a very small footprint, fly low to the ground and arrive at its destination in the fastest possible time, ORBS allow access to urban or rural areas that are otherwise inaccessible with exiting ground or flying craft. During hurricane response and recovery, when roads are blocked, airfields out of commission, and some areas of the disaster zone otherwise inaccessible, ORBS will fill the vital role of getting to people stranded. Typically, these craft are battery operated, and the need to preserve power to prolong is critical to maximizing the available flight range. A crucial feature in extending battery life is the use of bi-stable brakes for holding rotary actuators in last position. This takes some of the power load off of the motors that might otherwise be used to control the craft.

The Air Force has a program known as Agility Prime, whose mission is to identify and support private companies who can leverage their experience in hybrid and electric vehicles to develop affordable eVTOL rotorcraft for the commercial and military markets.  Over 200 companies are identified as potential partners in the Agility Prime program.

Flying cars and taxis are another segment of the Electric Aircraft market. Many American and international companies are now taking orders for their 2 and 3 seat air taxis with delivery scheduled for 2023 and beyond. The FAA is struggling with how to control the use of airspace for these new transportation vehicles. The age of the Jetson’s flying car has finally arrived!