The last time you flew on a commercial/regional/business jet, did the pilot or flight attendant ask you and other passengers to change your seat prior to takeoff, due to improper aircraft balance caused by more passengers seated on one side (or front/back) of the aircraft? The repositioning of people is to maintain the aircraft’s balance. This process establishes the proper center of gravity (CG) for the aircraft to facilitate a safe takeoff. During the flight, the aircraft’s fuel management system selects the specific fuel tank that fuel is drawn from, so that the aircraft’s CG is always maintained. 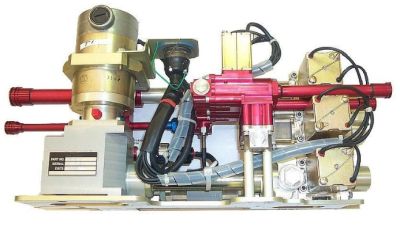 With an unmanned aerial vehicle (UAV), there is no flight attendant or pilot to help balance the change in fuel weight, and its effect on the maneuverability of the aircraft. UAVs usually have two or more tanks to hold fuel. As the tanks are depleted, the balance on the vehicle can change, which would result in a potentially unstable aircraft. A sophisticated system composed of pumps, valves, temperature and pressure sensors can be used to automate the balancing of fuel prior to, and during flight.

Fuel levels can vary based on atmospheric pressure, radiant heat transfer, and of course, consumption by the engine. In addition, the fuel temperature can be controlled to maintain relatively constant viscosity at varying altitudes and temperatures. The dynamics of flying for extended periods at extremely high altitudes, with sudden drops in altitude for surveillance, necessitate a responsive and accurate system to control fuel flow from the wing tanks in order to maintain the correct CG, and vehicle stability.

Valcor Engineering was tasked by a long-time customer to create a turn-key fuel management system for a new UAV. The objective was to create a manifold assembly that would fit into a pre-defined space. (Space aboard any aircraft is tight.) Before the Valcor Engineering team could begin designing the new fuel management system, they needed to know how many fuel tanks were in the UAV, how the fuel would be consumed, and how to interface with the UAV control system. Also needed were the end connections and locations for the fuel lines, as well as operating pressure and required flow rates. Valcor utilized an existing solenoid valve design as the basis for the valving components. The solenoid valves were mounted in custom manifolds to save space and weight. This also made final assembly easier. Third party components included off-the-shelf pressure and temperature sensors and fuel pump. The final design included two pairs of fuel supply valves; one each for supply to the engine, the other for fuel return to the in-service tank. A dump valve was also incorporated into the design in case fuel has to be discharged from the UAV. In service, the fuel management system draws fuel from one tank at a time, but switches from one tank to the other to minimize the imbalance of the UAV due to fuel consumption in flight. The control system monitors the fuel consumption and actuates the appropriate valve pair based on the fuel levels in the tanks.

“The resulting design has proven to be extremely reliable over thousands of hours in service,” according to Paul Meyers, Aerospace Sales and Marketing Director. “Valcor also provides the customer with a factory overhaul program, which services each component in the system and returns the system to the factory-fresh, like-new condition.”

Do you have a mission-critical system in need of design? Let Valcor partner with you to design and manufacture your most complex, or even a simple system design that will provide years of trouble-free service and the ability to keep that system running with factory-refurbishment.